British marine industry members work together to safeguard historic vessel’s future
·
From rescuing fallen airmen in the Second World War, to a much-loved ferry service, Rescue Motor Launch (RML) 497 has now become a museum treasure, joining the National Museum of the Royal Navy NMRN) family for all to see.
Head of Heritage Development at the NMRN, Nick Hewitt, said: “I am absolutely thrilled that the Heritage Lottery Fund (HLF) has supported us in acquiring RML 497. She’s an amazing survivor, full of original features and still fully operational, which is incredible for a wooden warship built for ‘hostilities only’ service during the Second World War.
“When she comes to Portsmouth she’ll be entering a whole new phase of her long life, and I’m sure our visitors will be just as excited as we are to step aboard her and see Portsmouth’s amazing naval heritage from the deck of a real warship.”
An HLF grant of £90,600 was secured for the project, with both the NMRN and the Coastal Forces Heritage Trust (CFHT) raising £5,000 each.
Stuart McLeod, Head of HLF South East, said: “These vessels’ daring missions during the Second World War is a little-known part of the UK’s naval history. Thanks to National Lottery players, this investment will bring the best surviving example of a Fairmile to Portsmouth, creating an exciting new attraction for the Historic Dockyard and ensuring the contribution of those who worked on this vessel is much better known.”
The Coastal Forces made an enormous contribution to Second World War in every aspect of war, gathering vital intelligence and sinking enemy vessels were just two of her operational roles.
CFHT’s aim, as a charity, is to preserve the history of the Royal Navy’s Coastal Forces.
Acting Chairman of the Coastal Forces and Heritage Trust, Trevor Robotham, said: “The Trustees of the Coastal Forces Heritage Trust (CFHT) are delighted that RML 497 has been acquired by the National Museum of the Royal Navy (NMRN).
“The Trust has contributed financially to the saving of the boat and will act as specialist advisers to the NMRN on its display to the public and on the wartime construction and use of this type of boat.
Constructed to the same Fairmile Type B design as the Motor Gunboats and constructed by the same company, the boat is one of only a few remaining examples of this very famous wartime design.”
RML 497 was sold off at Itchenor, West Sussex, after the war in 1947 and entered service with the Western Lady Ferry between Brixham and Torquay in that same year as Western Lady III.
During 2007 Western Lady III left South Devon but returned in 2009 when she was purchased by Greenway Ferry to once again grace the waters of Torbay and Dartmouth, carrying many thousands of passengers. She was renamed Fairmile and in 2013 was returned to her wartime colours.
Will Ford of Greenway Ferry said: “Fairmile has been a true passion for our company and we are sad to see her leave Torbay where she was seen by locals as a true icon of our sparkling waters – but those who truly care about this unique vessel will be over the moon that she is returning home and now part of the NMRN.”
Captain Robotham added: “She will be a great asset to the maritime scene within Portsmouth Historic Dockyard and she will bring to the public a greater awareness of the quite magnificent role played by Coastal Forces in the Second World War.”
The successful sale of RML 497 was brokered by Paul Singer of Yachting Brokers who were appointed as vessel brokers by specialist marine business agency, First Peninsula Marine acting in the sale of Greenway Ferry assets.
Director of Yachting Brokers, Paul Singer, said: “We are more than delighted to have more than achieved all of our objectives and to have played a part in the preservation of one of our nation’s naval assets and to see her move onto such a prestigious new home.”
RML 497 served with the 62nd ML Flotilla at Portland until January 1944. She then undertook anti-submarine target towing duties, in Kirkwall, before being sent to Appledore. She joined the 69th ML Flotilla at Felixstowe.
She was involved in a commando raid on the Channel Isles following D-Day. RML 497 played an active part during the Second World War rescuing downed airmen including other difficult and sometimes secretive roles. 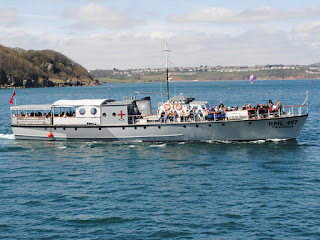